While in Berlin, I couldn’t get enough Mexican food. Silly I know. We were in the land of bratwurst and beer. But, I often found myself daydreaming of breakfast burritos, chips and salsa, and flour tortillas. I don’t know if it was my concern for not being able to find it again for the next few months, which has been true, or if it’s such a staple in my diet that my body was craving it. Regardless, I ate Mexican food as often as I could. When I wasn’t at Markt Halle Neun Thursday night eating Los Trompiras tacos al pastor, I was making it myself. Breakfast tacos became the norm. 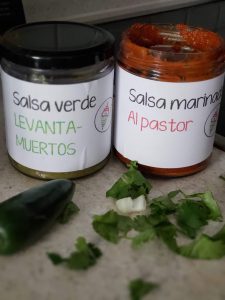 When Los Trompiras let me try their al pastor marinade, I was so excited. Their marinade is a beautiful combination of acid, spice, and sweetness. Pineapple juice is the main component of what makes tacos al pastor so special. Pork is the perfect combination for al pastor, without a doubt, but I wanted to try something different. My mind started racing about what I could make. But then the pressure hit, I needed to do their marinade justice and honor what Los Trompiras stands for; providing authentic taste and essence of Mexican cooking. To read my previous post about Los Trompiras and the incredible people behind the company, click here.

I decided to stick with the classic, a taco. But instead of traditional pork al pastor, I decided to change things up. I was inspired by what I would make if I was back in San Diego; cooking up a big dinner for my family, eating in the backyard on a warm summer afternoon. Since my brother and I often enjoy vegetarian options and gravitate towards poultry, I decided to make a chicken and mushroom variety.

To start my tacos, I marinaded two chicken breasts (cubed) and three portobello mushrooms (sliced) in separate containers overnight. After marinating for at least 20 hours, the cubed chicken and mushroom slices were ready to cook. Normally, I would have loved to have grilled these. There’s something about the char of the grill I love, especially on vegetables.  But without a grill in Berlin, I sauteed them separately in sautee pans. I added them to warmed corn tortillas, topped with diced white onion, cilantro (or as they call it in Berlin, coriander), diced pineapple, and Los Trompiras salsa verde.

Orecchiette with Kale and White Beans